Brave vs. Fearless: Why You Should Be Both - Daring Migration
36
post-template-default,single,single-post,postid-36,single-format-standard,theme-stockholm,qode-social-login-1.0,qode-restaurant-1.0,woocommerce-no-js,ajax_fade,page_not_loaded,,select-theme-ver-4.4,wpb-js-composer js-comp-ver-5.4.7,vc_responsive

Brave vs. Fearless: Why You Should Be Both

November 10, 2017 In Becoming Brave By katlandreth

Brave vs. Fearless: Why You Should Be Both

Ever wish you were braver?

When I hear about people doing thrilling things I wish I could join in. But I usually chicken out. Instead of a thrill I feel panic.

Honestly, I’d just like to not feel fear. Not feeling fear is fearlessness though, not bravery, right? OK so being fearless would feel great. But being brave is supposed to be a good thing too. So what makes bravery different from fearlessness? Are both good?

A couple of weeks ago Tony and I had a somewhat unpleasant thrilling experience. It made me realize I should learn to cultivate both fearlessness and bravery if I want to get the most out of our adventures.

Once upon a time in Chiang Mai, Thailand, Tony and I were having a lovely walk down a quiet street. We were moving to a new hotel for the week and we were almost there when along came a ferocious, barking, growling, snapping dog.

Suddenly our lovely stroll in paradise turned into that scene in Thor Ragnarok where the giant wolf/dog is about to eat all of the Asgardians on the rainbow bridge.

When I’m afraid, a tiny fearful bunny takes over my body and the only choice it gives me is run or freeze. Apparently instead of a proper “fight or flight” response, I have a “retreat or pretend you’re a rock” response. In that moment, with the Big Bad Wolf snapping at our heels, every fiber of my being screamed RUN AWAY!

The rational part of my brain had just enough influence to tell me acting like prey is probably not a good idea when you’re confronted with an actual predator. So even though I wanted to run I kept walking forward. I felt like a new born giraffe wobbling away from a lion, but I kept going.

Once we were safe inside the hotel lobby and I could remember how to use nouns again I asked Tony what the hell was that about? I saw the dog lying in his driveway but I couldn’t tell what set him off. Tony said he thought everything was fine until he looked directly at the dog. Maybe he thought that was a challenge.

Apparently the dog’s job was being an asshole across the street from our hotel, so we would probably see him again. But we decided if we didn’t look directly at him everything would probably be fine.

And everything was fine until two days later when the same exact freaking thing happened. We were walking down the street, almost past the dog’s territory, and suddenly a bolt of fur and teeth came flying at us.

My bunny brain kicked in and I froze, but Tony took action.

In one sure move he spun around, planted his feet in a wide confident stance, and directly faced the dog.

I couldn’t see Tony’s face but I imagine he looked something like this:

The dog stopped dead in his tracks. Tony’s posture must have convinced the dog this was a challenge he would not win, and he promptly retreated back to his driveway.

We walked back and forth on that road at least twice a day for the rest of the week, but the dog didn’t bother us again.

Later that evening, once I had shaken the cement boots from my feet and cleared the cotton from my mouth, I told Tony I thought I have an overactive adrenaline response. Because when something frightens me it feels terrible. My legs get heavy, my vision gets blurry, my brain doesn’t work good.

So I asked, if that’s a normal adrenaline response, how was he able to act so confidently while my body chemistry seemed to be anesthetizing me so I wouldn’t feel myself being eaten.

He said he didn’t get an adrenaline rush. He wasn’t afraid.

When Tony turned to face the dog, he was being fearless. He was literally without fear.

When I kept walking even though I was afraid, that was bravery. I wasn’t saving kittens from a burning building or anything but it was still a little brave.

Is being fearless better than being brave? 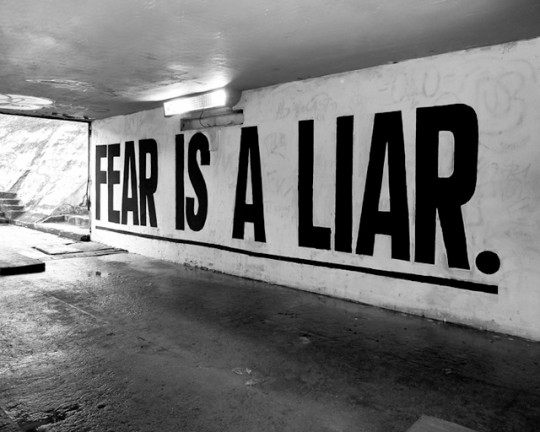 Fearlessness is definitely the more pleasant state. I like being able to rationally choose a course of action. I also like not feeling like my mouth is full of peanut butter and my legs are made of Jello.

But a little bit of fear is actually pretty useful for avoiding danger when your rational brain fails you. A woman known as S.M. who is missing her amygdala (a part of the brain you need to feel fear) has gotten into several dangerous situations presumably because she’s unable to feal fear.

Plus, fear can give you just enough pause to stop and think before you do something stupid. Being startled might keep you from stepping on a snake, or walking in front of a bus.

So yeah, it feels better to not be afraid, but it’s probably not helpful or even possible for most people to be totally fearless. Even if I get really good at being fearless, there will probably be times when I’m afraid and I have to keep going. In those times, I’ll have to be brave.

So is bravery better? 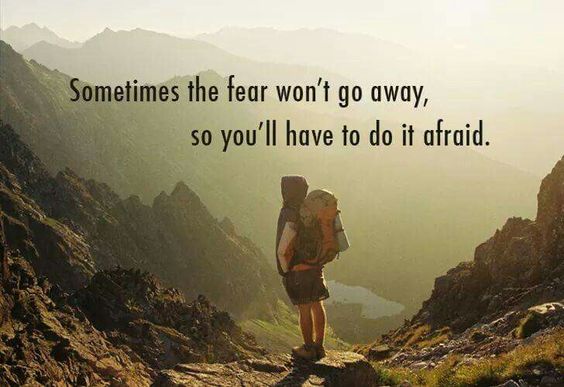 Being able to push through your fear is an amazing human ability. It’s like you’re wrestling with your primitive instincts and telling them nope, not today – today I have more important things to do.

But sometimes – maybe even a lot of the time – the fear that necessitates bravery is unfounded.

I probably shouldn’t have been that afraid of the dog. I actually really like dogs (four of my favorite people are dogs), and I know that barking and snarling is usually just posturing. He probably wasn’t going to bite us, and he definitely wasn’t going to literally eat me like I imagined.

I’m also afraid of flying and escalators even though they’re the two safest forms of transportation on the planet. Being afraid of these things makes me feel awful without doing me any good since there’s no real danger to flee from, or fight, or trick into thinking I’m a rock.

And in the dog situation, being brave only got me as far as putting one foot in front of the other. I escaped, but I wasn’t able to solve the problem. Tony’s fearless response to the dog actually addressed the problem and made things better.

So it seems like when fear is unfounded or unhelpful, instead of being brave it’s probably better not to feel that fear at all.

Fearlessness feels better, and most of the fear I feel is probably not helpful. So it seems like a good idea to reduce the amount of fear I feel, especially the unhelpful kind.

But since being completely fearless is probably impossible for neurotypical people it also seems like a good idea to prepare to be brave.

Apparently Navy Seals are trained to minimize the fear they feel under stressful situations. And preparing for stressful situations by rehearsing them can help people make better decisions even when they’re afraid. That gives me hope that someday I might be able to use a protocol that helps me turn into a big brave dog instead of a little bunny when I’m afraid.

But if you’re like me and you already have a pretty high baseline stress level, it’s probably not the best idea to start rehearsing a bunch of stressful events. That seems like a great way to make the problem even worse.

So my first goal is to reduce my baseline stress. I’m hoping that will help my brain’s alarm system to chill out and keep me from being afraid of things that don’t really warrant it. Once that’s under control, I’ll start working on dealing with fear more gracefully than a panicked woodland animal.

Ultimately, if I want to travel the world, have adventures, and do exciting things without giving myself panic attacks every day, I’ll need to be more fearless. If something isn’t really a threat, I don’t want my body to behave as thought it is. But for those times when I can’t help but be afraid, I want to be prepared to be brave.

I’ll keep you posted on my progress.

Sorry, the comment form is closed at this time.